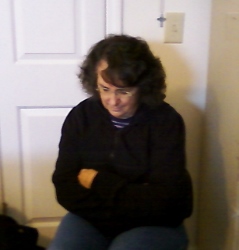 Finally, be strong in the Lord and in the strength of his might. Put on the whole armor of God, that you may be able to stand against the schemes of the devil. For we do not wrestle against flesh and blood, but against the rulers, against the authorities, against the cosmic powers over this present darkness, against the spiritual forces of evil in the heavenly places. Ephesians 6:10-12 ESV

You know, sometimes we need to be reminded of where our real battles lay. It is not to say that we don’t have human enemies coming against us. We do. And, they are very real, and they can be very oppressive. But, behind them is Satan and his many hordes.

So, this means that we don’t go into this battle in our own strength, or with our own human wisdom. We go into this battle in the strength of the Lord, putting on the armor of God which he has supplied. And, this means, too, that we seek out the wisdom and counsel of God in these situations so that we don’t let our own emotions get the best of us. We pray for guidance and direction in what to say, and in when to keep silent and to say nothing, too.

For, sometimes Satan will use other humans to goad us into discussions which are wholly unnecessary and fruitless, and/or to try to trip us up with our words, in order to accuse us. For, he has many schemes which he will use against us to try to bring us down, or to get us discouraged, or to get us feeling hopeless or without resource. For, this is his goal, to get us to doubt God and to be fearful, instead of putting our trust in our Lord.

So, we need to be aware of his various schemes so that we don’t fall prey to his cleverly devised traps. And, then we need to fight Satan with the armor of God in our conflicts with other humans.

Therefore take up the whole armor of God, that you may be able to withstand in the evil day, and having done all, to stand firm. Stand therefore, having fastened on the belt of truth, and having put on the breastplate of righteousness, and, as shoes for your feet, having put on the readiness given by the gospel of peace. In all circumstances take up the shield of faith, with which you can extinguish all the flaming darts of the evil one; and take the helmet of salvation, and the sword of the Spirit, which is the word of God… Ephesians 6:13-17 ESV

This is not some formula here. This is not words that we say. This is how we fight against Satan’s schemes against us. And, he does use other humans to carry out his schemes, too, whether willfully or willingly or not. For sometimes he influences other humans in ways they are not even aware of, while other times he uses other humans who are his willing servants to do his bidding, for he just feeds off of or plays off of their fleshly appetites.

So, if we are going to survive his onslaught, then we need to put on this armor of God daily and consistently in order to defeat him and to be victorious in battle. And, putting this armor on just means to apply it to our daily lives, in practice.

So, for example, one of Satan’s biggest weapons he will use against us is his lies, which may be just what he whispers in our ears, or it may be something he influences other humans to say. And, so we have to know the truth of what God’s Word says and then use it against him. So, if he is whispering lies in our ears, we reject the lies, and we proclaim and believe the truth, instead.

And, if he uses other humans to tell lies, then we tell these humans the truth, instead, to counteract the lies and to defeat them. Or, we tell the truth to those who are believing the lies of others, so that they will not believe the lies, and so that they will believe and will follow after the truth. For, so many lies are being told these days through our political leaders, through the news media, and through men and women in the pulpits in our churches, too.

But, sometimes the lies are being said just to goad us, to provoke us, and to upset us, or to get us into a useless and pointless conversation in order to distract us from what is really important. And, I believe this is what is happening a lot on Facebook, on Twitter and in the news media. So much of it is a game, a very evil game that the powers of this world play against the people of the world where they get them fighting against one another over things that probably don’t even exist, but are all part of the soap opera.

So, we need the wisdom of God to know what is real and what is not real, and when we are just being played, fooled and tricked into getting into discussions with people either to distract us from what is important or to try to get us to lose our cool or to say something we shouldn’t have said that can later be used against us. For, remember the Pharisees did this to Jesus on a regular basis, saying things to him or about him in hopes to trip him up with his words. But, they failed every time.

… praying at all times in the Spirit, with all prayer and supplication. To that end, keep alert with all perseverance, making supplication for all the saints, and also for me, that words may be given to me in opening my mouth boldly to proclaim the mystery of the gospel, for which I am an ambassador in chains, that I may declare it boldly, as I ought to speak. Ephesians 6:18-20 ESV

We have to be in prayer incessantly. Yet, this does not mean that we stop everything going on in our lives so that we can go somewhere alone to talk with God. Life has to go on. We have things we have to do, jobs to fulfill, etc. But, if we see that our Lord is living within us, so that he is with us always, and if we keep open communication with our Lord through listening to him and through walking in obedience to his commands, then we can converse with him at any time and in any circumstance throughout the day.

And, we also need to be praying for one another. For, all who are true believers in Jesus Christ, who are following after him and his ways, need prayer, and they need encouragement, too. But, encouragement is not just a pat on the back, and it is definitely not telling people lies, but it is doing what is beneficial and healthful for others, which will help them to grow in their faith and in their walks of obedience with Christ.

And, we need to be praying especially for those who are out there on the front lines of this battle, who are speaking the truth in love, and who are exposing the lies of Satan for what they are, and who are proclaiming the truth of God’s Word for all who will listen. For, they are being opposed by Satan and by his followers on a consistent basis, and many of them are being severely persecuted for their testimonies for Jesus Christ.

But, in all these things, we need to be in prayer, seeking God’s counsel and his wisdom and his strength to do what is right and to not fall into the traps of the devil who wants to find ways to trip us up so that he can accuse us.

My hope is built on nothing less
Than Jesus’ blood and righteousness;
I dare not trust the sweetest frame,
But wholly lean on Jesus’ name.

When darkness veils His lovely face,
I rest on His unchanging grace;
In every high and stormy gale,
My anchor holds within the veil.

When He shall come with trumpet sound,
Oh, may I then in Him be found;
Dressed in His righteousness alone,
Faultless to stand before the throne

Christ alone; cornerstone
Weak made strong; in the Savior’s love
Through the storm, He is Lord
Lord of all

One thought on “Standing Against the Enemy”

My Walk of Faith